Super Ubiquinol Coenzyme Q10 (CoQ10 for short) is a potent antioxidant naturally present in your body that supports cardiovascular health and is absolutely essential for healthy mitochondrial function. Ubiquinone, the other CoQ10 form, is difficult for your body to absorb — but the antioxidant form ubiquinol, like that in Super Ubiquinol CoQ10, absorbs up to eight times better! 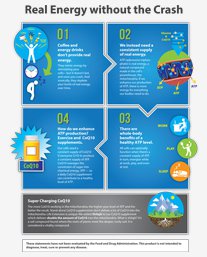 Benefits at a Glance

Mitochondria are tiny cellular structures that turn the foods you eat into usable energy by converting them into a compound called adenosine triphosphate (ATP) with the help of CoQ10. ATP gives your cells the power they need to do their jobs. And CoQ10 is essential for healthy mitochondrial function in tissues and organs throughout your body.

Ubiquinol CoQ10 stays in your blood longer, too: In a pre-clinical study, ubiquinol was present in the blood at a concentration over three times higher than ubiquinone 8 hours after ingestion. That is why we only use ultra-absorbable ubiquinol CoQ10 in our Super Ubiquinol CoQ10 softgels.

Ratings based on results of the 2019 ConsumerLab.com Survey of Supplement Users.
Learn More www.consumerlab.com/survey2019.