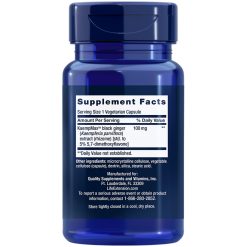 Kaempferia parviflora is a member of the ginger family that has been used to promote male sexual health for years.

Also known as Thai Black Ginger, K. parviflora is native to Southeast Asia. It’s been used to promote male sexual health for years, but only now has K. parviflora been studied in the west. And the results are impressive: two clinical studies show promise for male sexual function, response, performance, and satisfaction with results seen after 30 days.

K. parviflora works by promoting nitric oxide synthesis, which relaxes blood vessels and enables healthy blood flow, the key to healthy male sexual response. It also encourages a healthy brain response to sexual stimuli and helps to inhibit an enzyme that can affect male sexual response.  And it does both of these things independently of hormone levels.

In an eight-week randomised, double-blind clinical study, K. parviflora extract promoted a healthy male sexual response as compared to placebo. Impressed by these results, formulators at Life Extension® set out to confirm the study’s findings. In our own clinical study, subjects taking KaempMax™ K. parviflora extract standardised for 5% of the active compound , 7-dimethoxyflavone for 30 days reported healthy sexual function and satisfaction.

K. parviflora did not significantly affect hormone levels in both clinical studies, making it an excellent complement to testosterone health supplements.