How Pomegranate May Protect Against Cancer 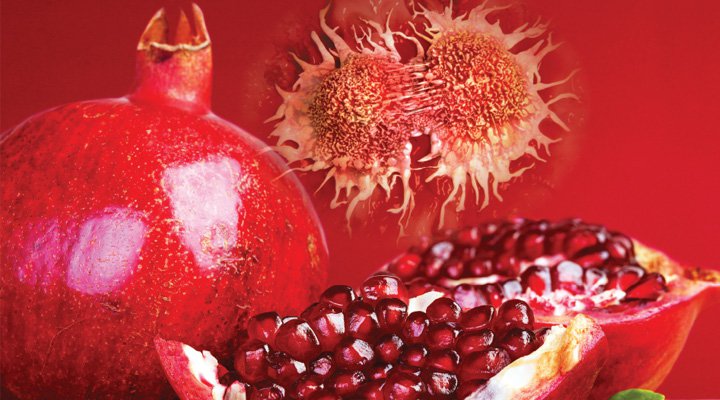 Pomegranates are best known for their ability to improve arterial health. Accumulating data have demonstrated that pomegranate has cancerprotective properties as well.1-3 Some of the most promising findings on pomegranate extracts show their ability to impede progression of prostate cancer. Additional studies indicate that pomegranate may protect against breast and colon cancer as well.4,5 Dietary factors are increasingly recognised as playing a role in cancer development. More than 70% of certain malignancies—like colorectal cancer—are related to diet and lifestyle factors.6 Studies show that high fruit and vegetable consumption is associated with lower cancer incidence.6 That’s especially true when diets include large amounts of polyphenols from specific plant foods.7 The challenge is that, while adding polyphenol-rich foods to our diets is beneficial, it doesn’t always provide enough polyphenols to exert a meaningful effect on prevention.6 That’s where pomegranate extracts may play a crucial role. 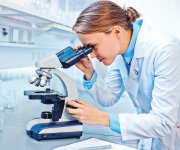 The most promising studies on pomegranate’s anti-cancer actions are on its ability to slow the progression of prostate cancer. In prostate-cancer patients, serum PSA levels are the most commonly used marker to assess disease status. One standard for evaluating cancer progression is to measure the time it takes for PSA levels to double from a baseline value. The longer it takes for PSA to double, the slower the cancer is progressing.8 Studies show that supplementation with pomegranate juice or extracts can significantly increase the time it takes for PSA to double in men with prostate cancer. In one study, men received 8 ounces of pomegranate juice daily following surgery or radiotherapy for prostate cancer. Prior to treatment, the subjects’ PSA doubled in an average of 15 months, indicating quite rapid disease progression. But after treatment with pomegranate juice, PSA took an average of 54 months to double its value, which is a clinically and statistically significant difference.9 Another study evaluated men with recurrent prostate cancer (which is cancer that comes back after treatment such as surgery). In this study, taking pomegranate extract daily for up to 18 months increased the time it took for PSA to double from 11.9 months at baseline to 18.5 months.10 These studies offer evidence of pomegranate’s ability to slow down the progression of prostate cancer.

While most of the clinical studies on pomegranate’s anticancer benefits have been conducted in men with prostate cancer, the encouraging results can be expected to translate to other malignancies as well. In fact, numerous animal and basic lab studies have now added to our understanding of pomegranate’s promise in cancer prevention. One of the first questions about any natural compound (or drug, for that matter) is how well it is absorbed after oral intake. It is also important to determine how much of the compound ultimately reaches its target tissues (glands, organs, etc.). Studies show that the pomegranate components ellagitannins (which are the most abundant polyphenol found in pomegranate juice) are not only extremely well-absorbed, but also get delivered to many of the tissues where human cancers arise—especially prostate, colon, and intestinal tissues.11 This important finding was confirmed in a human study of colorectal cancer patients. When the patients supplemented with 900 mg of pomegranate extracts for 15 days prior to surgery, it resulted in significant accumulation of the extracts and their active breakdown products in colon tissue, indicating a targeted effect.2 Once they get to their target tissues, pomegranate compounds exert numerous effects that can help prevent tumors from developing and spreading. This has been demonstrated in animal studies of xenografts, which are implants of human cancer cells that are surgically engrafted into host animals. Xenograft studies now demonstrate that not only can pomegranate extracts delay the development of a tumor after it has been implanted, but they can also decrease the size and blood supply of those tumors that do develop.12-14 Supplementation with three specific compounds found in pomegranate—luteolin, ellagic acid, and punicic acid—has also been shown to inhibit the progression and spread of prostate cancer in animals injected with human tumor cells.14 In this study, pomegranate supplementation inhibited the growth of the primary tumor, and also shut down biochemical signaling pathways required for metastasis. As a result, none of the implanted tumors metastasized. This is a tremendously important finding, especially considering the terrible prognosis in humans when metastasis occurs.

What You Need to Know

Actions Against Colon and Breast Cancer 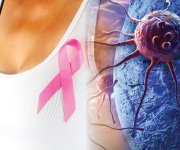 Many fast-growing tumors can be induced in small animal models by treating them with known cancer-causing chemicals. This is a technique that is commonly used in studying cancers of the colon and digestive tract. Such cancer-inducing treatment leads to the development of early precancerous lesions known as aberrant crypt foci in colon tissue, which represent areas of abnormal cell replication and growth in the folds of tissue that line the intestine.15 If left untreated, aberrant crypt foci have a high likelihood of progressing to intestinal polyps, and then to fully-developed cancers. But that story changes when animals are given pomegranate extracts prior to exposure to the toxic cancer-causing compound. In these scenarios, aberrant crypt foci occurred significantly less frequently in the animals supplemented with pomegranate extracts, compared to the unsupplemented animals.15-17 These studies show pomegranate’s ability to help prevent the precancerous changes that can lead to the development of tumors. Other studies go a step further, and demonstrate pomegranate’s ability to improve survival rates in animals with colon cancer.18 A study published earlier this year showed that pomegranate extracts have protective effects in chemically-induced breast cancer. When pomegranate extracts were given to rats before and after they were exposed to a chemical that caused breast cancer, the extract was found to reduce the incidence, number, and size of breast tumors. This led the researchers to conclude that pomegranate’s compounds “could be developed as a chemopreventive drug to reduce the risk of breast cancer.”19 Studies have also indicated pomegranate’s protective effect against cancer in patients with inflammatory bowel diseases. Chronic intestinal inflammation is a known precursor of intestinal malignancies, which is why inflammatory bowel diseases such as ulcerative colitis and Crohn’s disease substantially increase the risk of such cancers. The good news is that in studies of animals with experimentally-induced colitis, the pomegranate constituent ellagic acid has been found to inhibit the progression of colitis, and to downregulate many of the molecular signaling pathways that get switched on and promote cancer in colitis patients.20

One reason why pomegranate extracts have demonstrated potent effects against a variety of different types of malignancies is because they mount a multitargeted attack against cancer cells. Cancer is a complicated, multifactorial disease, with no single cause and no likely single cure. Because of that, cancer prevention strategies are most effective when they simultaneously address the many underlying causes of cancer in a multitargeted fashion. This is what makes natural compounds such as pomegranate so appealing for cancer prevention. Unlike synthetic molecules, natural compounds—especially polyphenols—are capable of a multitargeted effect because they operate within the same complicated set of rules and events that cancer itself plays by. Studies show that pomegranate extracts and polyphenols exert seven different mechanisms of action on developing cancer cells. Let’s take a look at pomegranate’s wide ranging effects: DNA damage is considered the initiating phase for cancer development. Mutations in DNA genes can arise from exposure to radiation (including ultraviolet light), to toxins, and even to byproducts of normal metabolism, such as oxidative stress. Laboratory studies demonstrate that pomegranate extracts, including punicalagin and ellagic acid, can prevent DNA damage from many different sources.21-23 Out-of-control proliferation of cells is the hallmark of cancer. Such proliferation occurs as a result of changes in specific genes that normally maintain regulation over the cell proliferation. When DNA regulatory genes are suppressed, endless cellular replication contributes to more rapid cancer progression. Pomegranate extracts are capable of interfering with abnormal cell-proliferation cycles, thereby impeding aberrant replication.24-27 Low-grade inflammation is a well-known promoter of cancer cell growth and survival.28 Pomegranate extracts and polyphenols shut down certain inflammatory signals (such as NFkappaB) and suppress the production of other pro-inflammatory molecules.12,20,29-31 Loss of apoptosis is another change that occurs as cells undergo malignant transformation. Normally dividing cells receive many signals to stop replicating, and in many cases, to take themselves out of the picture so that normal tissue can form. The problem is that malignant cells suppress genes that trigger apoptosis. Pomegranate extracts can restore apoptosis to cancer cells, helping to halt continued expansion and if caught early enough may prevent a tumor from forming.7,19,24,25,32,33 Forming new blood vessels (angiogenesis) is a necessity for burgeoning tumor cells, as they need to nourish themselves during their rapid growth spurt. Pomegranate constituents have shown the ability to inhibit angiogenesis in laboratory and animal studies.13,34 Invasion of local tissue and spread to distant tissue (called metastasis) heralds the advance of cancer to a much higher grade and raises the risk of death. In order to invade tissues, cancer cells produce “protein-melting” enzymes that allow them to squeeze into tiny spaces between healthy cells, while metastasis requires a host of molecular signals that allow bits of tumor to set up shop in new environments in the body. Pomegranate extracts combat both of these actions by suppressing the production of such tissue-destroying enzymes and signaling molecules, thereby helping prevent cancer cells from spreading.14,27,35 Growth stimulation by sex hormones is a feature of some of the most common human cancers, including those of the breast and prostate, which have cell-surface receptors for those hormones. Pomegranate extracts slow the growth of many hormone-dependent cancers.36-39 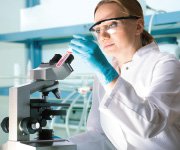 Pomegranates contain a host of protective molecules that benefit not only the plant, but those who consume it. While these constituents are best-known for reducing the risk of heart disease, they are now also being explored for their ability to help prevent cancer. Because cancer is a multifactorial disease, any compound aimed at preventing it should have multitargeted effects. This is a virtue of the active constituents of pomegranate fruit, skin, and even leaves. Lab studies show that pomegranate extracts exert at least seven distinct beneficial effects that confer protection to cells against malignant changes, while making those that do mutate less likely to progress. Animal studies help corroborate that pomegranate supplementation can reduce the incidence of cancers, slow their growth, and reduce the size and number of cancers that develop. Human studies indicate that pomegranate extracts are capable of slowing the progression of prostate cancer. Additional research findings indicate pomegranate’s potential benefits in breast and colon cancer as well. Pomegranate’s multitargeted properties make it an ideal chemoprevention supplement, one that is widely available and potent in its effects. Given its cardioprotective effects, pomegranate extracts offer a well-rounded approach to protecting against some of today’s deadliest diseases.
MAGAZINE EXTRACTS
HEALTH NEWS