Skip to content
4 DAY FLASH SALE - SAVE ON EVERYTHING!

Lower the risk of macular degeneration

A major cause of blindness in the United States is macular degeneration. Up to 11 million Americans are afflicted with it. Scientists have identified plant pigments that accumulate in the eyes and protect macular density.

People with the highest intake of lutein and zeaxanthin have a 41% lower risk of advanced macular degeneration. For people already afflicted, extracts of the spice saffron have been shown to improve visual function. One study in patients with early macular degeneration showed that 80% of those taking saffron daily for three months improved visual acuity on the Snellen eye chart (by one line) compared to baseline.

An improvement by one line on the Snellen chart means someone whose visual acuity at a distance was 20/40 would be able to see with 20/30 vision after just three months of daily saffron use.

Several other compounds have been shown to help prevent and even partially restore the vision loss that occurs with age-related macular degeneration.

A Leading Cause of Blindness 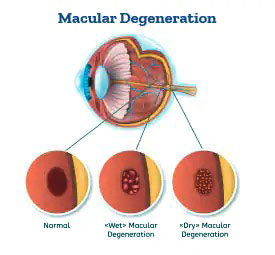 Age-related macular degeneration is the leading cause of severe vision loss and blindness in people over age 60.

The progressive damage that occurs to the macula contributes to the characteristic gradual loss of central vision. Patients often complain that central vision becomes washed out, with a loss of detail. Straight lines may also appear wavy. 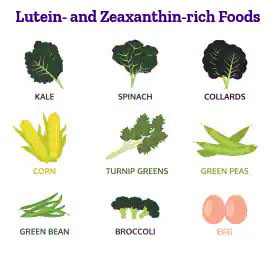 Within the body, they concentrate in several parts of the eye, including the macula. There, they absorb blue and ultraviolet light, preventing retina damage. They also quench free radicals, inhibiting their destructive impact on the cells of the retina.

Scientists demonstrated that 48 weeks of taking daily lutein alone or lutein combined with zeaxanthin produced significant increases in electroretinogram signals. This is a measure of the power of light-sensitive cells to produce electrical impulses after stimulation by light.

In a series of large clinical studies, researchers documented that oral intake of lutein and/or zeaxanthin can:

One study of over 102,000 people aged 50 and older took more than 20 years to complete. It found that those with the highest intake of lutein and zeaxanthin had a remarkable 41% lower risk of advanced macular degeneration.

Meso-zeaxanthin is a yellow carotenoid derived from lutein. It is known to be produced in the eye itself, and a small amount may occur in certain foods.

Astaxanthin is a reddish carotenoid found in marine algae and some seafood.

In preclinical studies, it protects the cells of the retina from being damaged by physical and oxidative stress. For example, astaxanthin may protect eye cells from UV-induced, free-radical damage by suppressing activation of an inflammatory protein, nuclear factor-kappa B (NF-kB).

In experimental studies, astaxanthin prevented the vision-damaging effects of wet macular degeneration that occurs when blood vessels leak fluid into the retina. One rodent study showed it prevented cell damage related to increased pressure in the eye, which is the underlying problem in glaucoma.

Astaxanthin’s eye-protecting ability may be especially beneficial for people with diabetes. Diabetic retinopathy occurs when high levels of blood sugar damage the retina over time, leading to vision problems. Among those who have had diabetes for over a decade, 80% suffer from this condition. In animal studies, astaxanthin targets the retina and prevents the early nerve-cell death that is caused by excess blood sugar.

Powerful Protection for the Eyes

Saffron has been studied for an array of neuro-degenerative eye diseases, including:

Saffron may provide these benefits thanks to its anti-inflammatory, antioxidant, and neuroprotective properties, along with its ability to help prevent cell death.

In one clinical study, 20 mg of saffron enhanced visual function in patients with mild to moderate age-related macular degeneration, including those already taking lutein and zeaxanthin. Compared to those taking a placebo, participants who took saffron alone improved on a standard vision-measuring eye chart by .69 letters. Those already taking lutein or zeaxanthin improved by .73 letters.

In another study, 20 mg of saffron daily improved the light-sensing abilities of retinal cells for patients with early age-related macular degeneration. After three months, these subjects were able to read one entire additional line on an eye chart, while those taking a placebo did not improve. This means that someone whose visual acuity at a distance was 20/40 would be able to see with 20/30 vision after just three months of saffron use.

To test longer-term benefits, scientists gave 20 mg of saffron daily to patients with early macular degeneration for an average of 14 months. Retinal sensitivity was improved for the entire period, and average visual acuity improved by an astounding two lines on an eye chart. This showed that longer saffron use produces greater improvement.

Alpha-carotene, a carotenoid and vitamin A precursor found in pumpkins and carrots, protects retinal cells from light-induced oxidative damage.

One study analyzed 63,443 women and 38,603 men, aged 50 and older. It found that those with the highest dietary intake of alpha-carotene had a 31% reduced risk of developing advanced age-related macular degeneration, compared to those with the lowest consumption.

This yellow-orange carotenoid has even been shown to provide protection for smokers. In one study of 1,414 men aged 65 and over, smokers with the highest alpha-carotene intake were found to have a significantly reduced risk of developing age-related macular degeneration.

Cyanidin-3-glucoside (C3G) is a flavonoid found in many dark-colored berries.

Recent research on human cells suggests that cyanidin-3-glucoside may protect epithelial (surface) cells in the cornea (the eye’s protective outer layer) against damaging effects of bacterial activity and inflammation.

C3G may also reduce oxidative damage from light and free radicals in retinal pigment epithelium cells. While these investigations are preliminary, cyanidin-3-glucoside may offer support to macular degeneration patients. Many of these afflicted individuals experience difficulties when performing activities at night and under low light, such as driving or reading at night.

The retina’s rod cells are the eye’s most sensitive cells, allowing us to see in very dim light. Loss of rod cells is associated with night blindness or reduced vision in low light. Cyanidin-3-glucoside has been shown to enhance the quality and function of rhodopsin, a light-sensitive protein found in the rod cells of the retina. It also boosts the ability of rhodopsin to regenerate.

One study of healthy volunteers showed that a berry extract containing cyanidin-3-glucoside improved night vision, allowing aging individuals to see better in darkness. This improvement was noticeable after just 30 minutes.

Taken in combination, C3G and other eye-protecting nutrients may provide the most complete range of benefits for preventing age-related vision loss.

The flavonoid cyanidin-3-glucoside can enhance night vision in as little as 30 minutes. In combination, these seven nutrients can provide comprehensive vision protection.