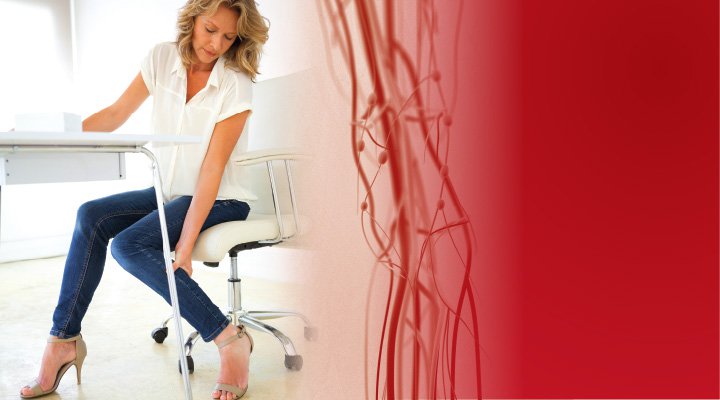 Those who sit more than four hours a day have a 48% increased risk of potentially lethal blood clots, known as deep vein thrombosis (DVT). A human study found that those taking a dual plant extract experienced zero cases of deep vein thrombosis. This and other data underscore a remarkable opportunity to protect against a leading cause of disability and death in adults, which is an abnormal clot that forms inside a blood vessel.

Long periods spent sitting—behind a desk, in a car, on a long flight, or on a couch—increase the risk of deep vein thrombosis (DVT), a blood clot that forms mainly in a deep vein in the leg, which can lead to a pulmonary embolism, a condition that is often fatal.1,2 Practically anyone can be at risk, and the statistics are frightening. According to the American College of Cardiology, those who sit more than four hours a day have a 48% increased risk of mortality from blood clots that originate in the veins.3 Through a series of well-designed studies, scientists investigating certain natural extracts found that they can block these blood clots from forming and can help break down small clots before they grow.4-7 They also found that these extracts safely restore the natural anti-clotting and clot-reversal processes, making a dangerous clot less likely to form and quicker to resolve if it does.7-10 When tested on humans in a placebo-controlled study, those taking a dual plant extract experienced zerocases of deep vein thrombosis compared to 5.4% afflicted in the control group.6 Veins have valves, which work with the natural pumping action of the leg muscles to prevent backflow of blood into the lower limbs. With age those valves tend to leak. In people who don’t move around much, blood tends to pool in their legs. According to the Centers for Disease Control and Prevention (CDC), as many as 900,000 Americans could be affected by venous thromboembolisms (blood clots) every year.11 Compare that to epidemics like all forms of cancer, which kill about 570,000 Americans annually. As sedentary lifestyles become common, the threat of deep vein thrombosis continues to grow and claim an ever larger number of lives. Research conducted by the American College of Cardiology found that individuals that spent four hours or more a day sitting compared to those who spent less than 2 hours had an approximate 125% increase in risk of cardiovascular events. This association was independent of traditional risk factors like smoking, hypertension, physical activity, and body mass index.3 Some even consider sitting to be the new smoking!12

A deep vein thrombosis can occur quickly, often at first with no warning symptoms. But when this clot breaks apart, symptoms occur with a deadly vengeance. Large pieces of the clot travel silently through the circulatory system and eventually block blood flow into the lungs. This sudden event produces a pulmonary embolism, a blockage that can severely reduce, and even entirely stop, critical blood flow to the lungs—an event that is commonly fatal within minutes. About 30% of those with a venous thromboembolism will die within one month, and about 25% of those fatalities will occur as sudden death. And about 33% of survivors have a recurrence within 10 years.11 Venous thromboembolisms are estimated to kill up to 100,000 Americans annually.11 Lifestyle changes can reduce the risk, such as quitting smoking, regularly exercising, and eating a healthy diet, but these are often insufficient to prevent a deadly catastrophe. Anticlotting drugs involve a risk of undesired bleeding, 13,14 and compression stockings have shown limited effectiveness.15,16 The reason that these approaches provide limited protection is that with physical pooling of blood, natural clot-breakdown systems slowly lose pace with the body’s clot-forming systems.17,18 Clearly, a new defensive strategy is needed. A natural, dual plant extract formula has been studied based on its ability to simultaneously inhibit venous clot formation and promote venous wall elasticity. 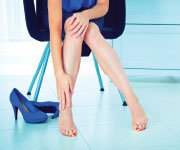 Deep vein thrombosis often occurs without warning symptoms. But if you do notice any of the following indications, call your doctor, especially if they appear suddenly:

After searching for natural, deep vein thrombosis-inhibiting interventions, scientists identified two ingredients that demonstrated powerful preventive effects: Nattokinase was shown in studies to break down fibrin—long, strand-like molecules that make up the main protein found in clots—and its precursor, fibrinogen, both of which are involved in red blood cell-inducedclot formation.8,19,20 Nattokinase decreased levels of other factors in the blood-clotting cascade, while raising levels of factors that prevent clotting. Specifically, nattokinase reduces the activity of two proteins (factor VIII and factor VII) that can produce unwanted clotting when elevated. No adverse effects or undesirable bleeding were reported.4 French maritime pine bark extract was demonstrated to reduce platelet aggregation, while increasing the activity of a blood flow-boosting enzyme that generates nitric oxide in blood vessels. Nitric oxide plays a critical role in regulating vascular function, which reduces thrombotic risks. Nattokinase and pine bark extract were shown to work together to prevent clots as well as to improve the microcirculation of the legs.9,21 French maritime pine bark extract was also found to inhibit the action of “protein-melting” matrix metalloproteinase enzymes. These enzymes would otherwise degrade elastic proteins in the blood vessel walls, making them stiff and reducing blood flow.10,22 Given these observations, scientists recognized that these two extracts could result in significant prevention of deep vein thrombosis by:4,7-10,19-22 Now let’s look at a more detailed evaluation of these ingredients.

Before designing human trials, scientists conducted animal studies that clearly demonstrated the beneficial effects of nattokinase. Studies in dogs showed that nattokinase produces a mild—but steady—increase in the rate of fibrin degradation in the blood. This effect works to prevent clots and to reduce the size and toughness of any existing ones.8 When nattokinase was given to dogs with experimentally-induced blood clots, researchers were literally able to watch the clots break down in real time using a type of X-ray technology called angiography.8 Then, in spontaneously hypertensive rats—a standard model for studies of high blood pressure in humans—nattokinase was demonstrated to break down fibrinogen (the precursor to fibrin) in the blood. And by a related mechanism, nattokinase reduced blood pressure, potentially by preventing conversion of the hormone angiotensin into its active, blood pressure-boosting form.23 A human study evaluating the effects of nattokinase found that it improves markers of coagulation. For this study, researchers recruited volunteers comprised of healthy individuals, cardiovascular disease patients, and dialysis patients. On a daily basis for two months, subjects took two capsules of nattokinase, each containing 2,000 fibrinolytic units.4 The researchers found that all three groups demonstrated significant decreases in procoagulation factors VII and VIII, and fibrinogen compared to baseline, suggesting that nattokinase works equally well in individuals with normal and impaired endothelial and coagulation function.4 No adverse effects were seen in this study,4 and safety tests completed on nattokinase confirmed its low-risk status.20 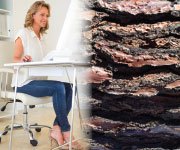 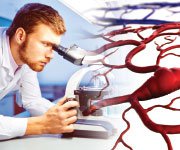 Deep vein thrombosis (DVT) and the deadly pulmonary embolism it can trigger (venous thromboembolism) is often the result of spending long periods sitting or standing. But other factors can put some individuals at an especially high risk. These risk factors include:27

This diagram illustrates normal venous blood flow, venous obstruction by a thrombus formation, and the rupture of the thrombus. A blood clot such as this forming in the leg of an individual with deep vein thrombosis (DVT) can break off without warning and lodge in the lungs or other organs, often resulting in death.

Scientists set out to test a formulation combining nattokinase and French maritime pine bark extract in a randomized, placebo-controlled human trial.6 All 204 passengers on a New York-to-London flight were instructed in deep vein thrombosis-prevention techniques: isometric exercises, standing and moving for five to ten minutes, and keeping hydrated. Passengers were randomly assigned to receive either capsules of placebo or capsules of the proprietary blend of nattokinase and French maritime pine bark extract. All subjects took the blend two hours predeparture and again six hours later. Ultrasound scans were done before and after the flight to detect clots. Passengers taking the supplement had zero deep vein thrombosis cases. However, five of the control passengers developed a deep vein thrombosis, and two others developed superficial clots, for a total of sevenevents—a 5.4% DVT rate among controls, compared to a 0.0% rate among the test subjects.6 The scientists also measured leg swelling, which was equal between the two groups preflight. Edema increased by 12% in the controls. But edema decreased by 15% in the supplemented passengers.6 These findings confirm that this novel dual-extract formula helps prevent deep vein thrombosis in individuals who spend long periods sitting and reduces the risk of sudden death from a resultant pulmonary embolism. No adverse side effects were reported.

TOO MUCH TV CAN LEAD TO PULMONARY EMBOLISM

Our parents always used to say that watching too much TV wasn’t good for us. It turns out they may have been more right than they realized. A recent study published in the journal Circulation found that a sedentary, couch-potato lifestyle can lead to fatal blood clots.28 Starting in 1988, researchers from Japan’s Osaka University recruited more than 86,000 subjects and had them keep track of how much television they watched over a two-year period. After 19 years, researchers found that 59 study participants had died of a pulmonary embolism—a blood clot in their lungs. Lack of activity causes a person’s blood flow to slow down, which can lead to a blood clot, usually in the pelvis or leg. The blood clot can then travel to the lungs and become wedged in a small blood vessel in the lungs with fatal results. The researchers calculated that the study subjects had a 40% increased risk of incurring a pulmonary embolism for every two hours of TV they watched each day beyond a threshold of 2.5 hours. The risk for participants who watched five hours or more was 2.5 times greater than the risk for those who watched under 2.5 hours. To avoid an embolism, study co-author Dr. Hiroyasu Iso recommends that, while watching TV, you get up “after an hour or so” and “stand up, stretch, walk around. Or while you’re watching TV, tense and relax your leg muscles for five minutes.”

Deep vein thrombosis is a serious risk for anyone who spends long periods sitting and can lead to a deadly pulmonary embolism. The two novel ingredients described in this article were shown to protect against venous thrombosis. These extracts inhibit unwanted venous clot formation, improve leg microcirculation, and promote vessel-wall elasticity. In a placebo-controlled human trial, these two nutrients prevented deep vein thrombosis in all volunteers who supplemented with it and decreased leg swelling. While the medical establishment provides no safe or practical solutions, these two agents are available to augment the effects of taking frequent breaks from any kind of prolonged sitting. If you have any questions on the scientific content of this article, please call a Life Extension® Wellness Specialist at 1-866-864-3027.