Skip to content
Save up to 70% | OVERSTOCK SALE ON NOW!
Shop

About 40% of adult Americans suffer from heartburn, which is often treated by proton pump inhibitor drugs such as Nexium® and Prilosec®. Long-term use of these stomach acid-blocking drugs can result in serious consequences. A healthier way has been developed to reduce acid re-flux and heartburn symptoms. 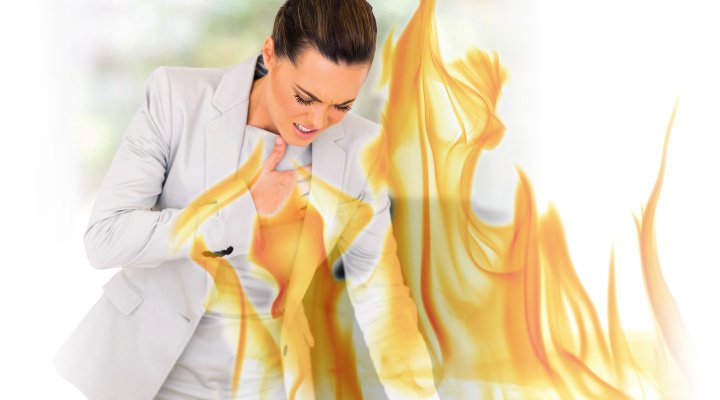 Heartburn afflicts more than 40% of adult Americans. When someone suffers frequent or painful heartburn bouts, they are often diagnosed with gastroesophageal reflux disease or GERD. There remain widespread misconceptions about the underlying cause of heartburn. Mass-advertising of drugs such as Nexium®, Prilosec®, and Prevacid® has convinced GERD sufferers that to relieve symptoms, they need to block production of acid in the stomach. But the human stomach must operate in acidic conditions to digest food properly. And long-term use of GERD drugs (proton pump inhibitors) involves serious health risks—ranging from kidney1,2 and cardiovascular disease3,4 to increased mortality.5,6 A common cause of GERD is a weakened sphincter muscle at the end of the esophagus that functions to keep food and acid in the stomach. When the sphincter fails to close properly, stomach contents back up into the esophagus, causing heartburn and increasing esophageal cancer risk.7,8 A new weapon has been identified that targets GERD symptoms by helping to neutralize acid in the esophagus, while leaving stomach pH balance intact.9,10 Human studies have demonstrated that this formulation’s compounds safely neutralize esophageal acidity—without disrupting gastric acid production. There were also clinically-measured improvements in esophageal peristalsis, which helps further prevent reflux.9-11 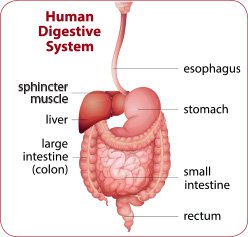 The human stomach is an extremely acidic environment, roiling with hydrochloric acid and protein-destroying enzymes—a necessary environment for the proper breakdown of large food molecules in preparation for further digestion and absorption in the small intestine. A thick lining of mucus separates the acidic stomach contents from the delicate walls of the stomach itself. The long flexible tube known as the esophagus that connects the mouth to the stomach is not designed to withstand such harsh conditions. To keep the acidic stomach contents away from its delicate tissue, the esophagus relies only on gravity and a sphincter muscle at the lower end. A heavy or fat-rich meal can slow stomach emptying and allow stomach pressure to overwhelm the lower esophageal sphincter, permitting highly corrosive contents to wash up, or reflux, into the esophagus. Many people suffer from transient relaxation of the sphincter muscle, triggering this problem unpredictably. The result—whether called heartburn, acid reflux, or gastroesophageal reflux disease (GERD)—is a burning, painful, proinflammatory, and potentially dangerous condition that afflicts more than 40% of American adults during any given 12-month period.12 Why “potentially dangerous”? Because the prolonged exposure of acids and protein-digesting enzymes to the delicate cells of the lower esophagus can produce precancerous changes. One result, a condition called Barrett’s esophagus, which refers to abnormal changes in cells, is a precursor to esophageal cancer.7,13Esophageal cancer is increasing at an alarming rate.14

Mainstream medicine has long targeted the wrong body organ to prevent and treat GERD, focusing on the stomach and the high level of acid it produces. As a result, pharmaceutical companies have taken advantage of the huge market stemming from this perceived “need” to reduce stomach-acid production. They have flooded consumers with advertising for a wide array of drugs designed to alter the pH balance of the stomach, which can have long-term adverse impacts on one’s health. In 2013, more than 15 million Americans were prescribed GERD-relieving medication and many more bought this class of drug over-the-counter.1,15 These drugs include omeprazole, lansoprazole, pantoprazole, esomeprazole, and rabeprazole, sold under a variety of trade names such as Nexium®, Prilosec®, and Prevacid®. Targeting stomach-acid production with these drugs does indirectly reduce reflux symptoms in the esophagus. The hidden side effects, however, constitute massive overkill and cause serious—and potentially fatal—health consequences. Reducing the stomach’s acidity weakens its ability to serve as a barrier to infection. It can also contribute to nutrient malabsorption. More critically, the drugs used to reduce stomach acidity—known as proton pump inhibitors or PPIs—have serious risks. Long-term use of proton pump inhibitors increases the risk of kidney disease,1,2 blood vessel calcification,16nutritional deficiencies,17-19 cardiovascular disease,3,4 infection (including pneumonia),20-24 diarrhea,25-27microbial disruption (dysbiosis),28-30 and bone fracture.19,31-33 And taking these drugs in high doses is associated with a 2.6-foldhigher risk of death.5 So the challenge has been to neutralize acid and other stomach contents specifically in the esophaguswithout reducing stomach pH balance. This would enable GERD sufferers to reduce their dose of PPI drugs or steer clear of them altogether.

Neutralizing Acid in the Esophagus

Scientists zeroed in on three natural compounds that, working together, are perfectly suited for a safe, esophageal-protecting effect. First, calcium carbonate has long been shown to act as an acid buffer and to promote neutralization of acid. Compared to swallowed minerals that work on the stomach, calcium carbonate in a chewable tablet form has been shown to reduce acidity in the esophagus.9,10 Studies have found that calcium carbonate in a chewable tablet form promotes esophageal motility. That is, it enhances the sequential, esophageal muscle contractions that help foods and liquids travel the distance from the mouth to the stomach. This helps block the backwards flow of stomach juices from the stomach into the esophagus and more effectively clears any acid already in the esophagus.9,10 Second, magnesium carbonate adds protection by neutralizing acid.34 It also provides supplementary magnesium—a nutrient that is frequently eliminated from the body through the use of proton pump inhibitor drugs.35 Third, a flavonoid-rich extract of licorice (Glycyrrhiza glabra) has been found to inhibit GERD symptoms. Licorice has been long used in the treatment of ulcers,36,37 and modern biochemical studies have now recognized its potent anti-inflammatory properties.38,39 The data on calcium, magnesium, and licorice suggest they may provide safe, protective benefits for GERD patients when taken in chewable tablet form. The real challenge, however, has been to determine whether these natural compounds could be proven effective in clinical trials of humans currently afflicted with acid reflux. 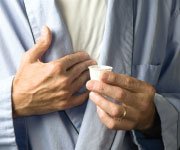 Relieving Heartburn Without the Risks of PPI Drugs

In one study, a group of 20 otherwise healthy individuals with a history of episodic heartburn were given food designed to induce that affliction—chili, cheese, raw onions, and cola.9 An hour after the meal, they were randomized into groups and given varying doses of calcium carbonate in chewable or swallowable tablets, an effervescent solution of bicarbonate of soda (baking soda), or a placebo. For 5.5 hours following the meal, the study team used esophageal and stomach probes to measure acid levels for all volunteers. Within a half-hour of treatment, acid levels began dropping more effectively in those who had taken the chewable calcium carbonate tablets—compared to any of the swallowable tablet formulations. The chewable group’s pH levels rose significantly in the esophagus, indicating much less acidity, compared to baseline and compared to the placebo group.9 The researchers were especially impressed that the chewable calcium carbonate—unlike proton pump inhibitor drugs—did not significantly decrease acid production in the stomach.9 These findings were supported by a second study that evaluated chewable calcium carbonate’s effect on esophageal motility, meaning how well the esophagus can utilize peristalsis (wave-like motion induced by muscle activity) to move its contents from the mouth to the stomach.10 None of the other common anti-GERD medications can improve esophageal motility, and impairment of this function increases the risk of heartburn. For this study, 18 heartburn sufferers were given a tablespoon of acid to swallow. Using esophageal pressure testing equipment, researchers then assessed the exact number of swallows and amount of time it took for each subject’s esophageal pH to naturally rise to 5.0—a much reduced acidity level.10 The same subjects were then given 1,500 mg of calcium carbonate in a chewable tablet, and the test was repeated. Results showed significantly improved esophageal pressure and contractions in the correct, downward direction. Acid clearance in the esophagus was markedly increased 30 minutes after chewing the tablet. This study found that it took 20 swallows and 12 minutes to eliminate the acid without the calcium carbonate tablets. When the same group of people were given the calcium carbonate chewable tablets, it took only 12 swallows and six minutes to eliminate esophageal acid.10 Calcium is needed for muscle contraction; prompting the researchers to suggest that one factor in these positive results may have been the fact that the chewable calcium carbonate tablets delivered concentrated calcium directly to the esophagus, potentially triggering stronger contractions.10 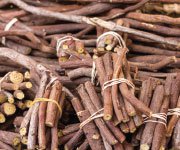 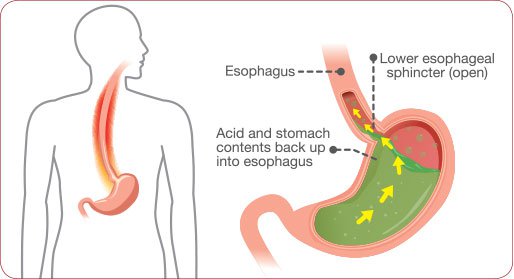 As mentioned earlier, deglycyrrhizinatedlicorice extract(DGL) was demonstrated to block inflammation by inhibiting certain enzymes and proinflammatory signaling molecules.38,39 Scientists conducted a randomized, placebo-controlled study, specifically designed to test this licorice extract’s anti-inflammatory effects on those suffering from functional dyspepsia—a chronic disorder of the upper digestive tract.11,40 The multiple symptoms can include heartburn, bloating, nausea, belching, and burning and pain in the epigastric area (the esophagus just above the stomach). Functional dyspepsia affects one in every ten people.40 The team enlisted 50 adult patients with functional dyspepsia. Subjects were randomly assigned either to a control arm that received a placebo or to an active arm that received 75 mg of deglycyrrhizinated licorice extract. Both placebos and extract were taken with a glass of water daily after food, in the morning and again at night.11 All volunteers were asked to complete a series of symptom and quality-of-life scales at baseline and after 30 days of treatment. Patients supplemented with the licorice extract reported a significant 51% reduction in their overall symptom scores, while the placebo patients experienced only a 29% symptom decrease.11 Licorice-supplemented patients were also asked to rate themselves on a dyspepsia-specific scale that considered 10 gastrointestinal symptoms—upper abdominal fullness, upper abdominal pain, belching, bloating, early satiety, nausea, vomiting, regurgitation, heartburn, and loss of appetite. Results showed a 55% decrease in these dyspepsia symptoms in the licorice extract group, while placebo patients showed only a 19% reduction.11 A substantial 56% of the supplemented subjects demonstrated improvements in what is known as a global efficacy score—a special index for the overall response to 30 days of intervention—while placebo subjects showed a 0% improvement.11 The overall findings clearly demonstrate that these natural compounds provide fast heartburn relief, effective GERD prevention through improved esophageal motility, and symptom improvement in those with functional dyspepsia. No adverse events or side effects were reported in any of the studies. 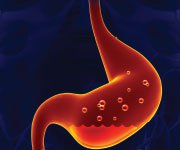 Gastric acid in the stomach
The public misconception about the underlying causes of heartburn, or GERD, has resulted in widespread use of drugs that dangerously—and excessively—reduce stomach acid. But the human stomach requires acidity for proper functioning. Proton pump inhibitor drugs have been found in observational research to seriously boost risk of illnesses ranging from kidney and cardiovascular disease to earlier mortality. Human studies demonstrate that proper use of low-cost nutrients can safely neutralize esophageal acidity—without disrupting gastric acid production. They also improve esophageal motility, which helps prevent acid reflux and improves protection of delicate esophageal tissue. Calcium carbonate, magnesium carbonate, and deglycyrrhizinated licorice extract have been shown to confer symptomatic relief from heartburn and dyspepsia.9-11,34 Those who seek to reduce or eliminate their reliance on proton pump inhibiting drugs should consider taking 1-2 chewable tablets containing these three nutrients after meals and at bedtime. If you have any questions on the scientific content of this article, please call a Life Extension® Wellness Specialist at 1-866-864-3027.