Skip to content
Products may ship with a black closure. LEARN MORE >>
Hurry.... 15% Off EVERYTHING - Ends Tonight!
LIFE EXTENSION MAGAZINE 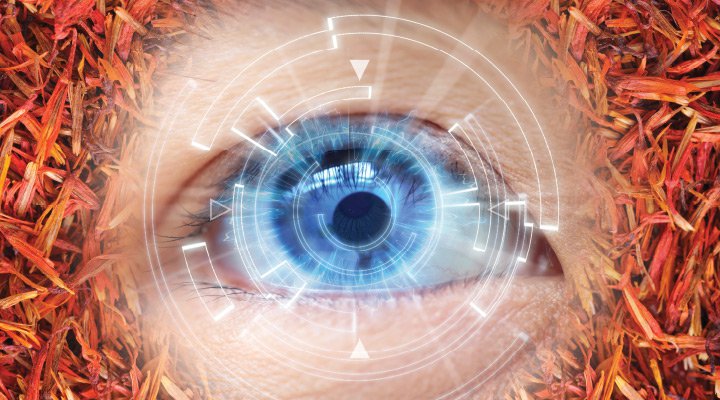 What’s missing has been an effective strategy for countering typical forms of vision loss that impact all maturing individuals. That limitation is about to change. Recent clinical studies show vision-enhancing benefits using extracts from a flower-derived spice called saffron.

Scientists first discovered that saffron can improve visual acuity as well as sensitivity to light, even in people with early macular degeneration. More impressively, patients experienced improvement in vision that was measured by them seeing an average of two additional lines on the eye chart commonly used by physicians to test vision. In another recent finding, people with the highest intake of alpha-carotene had a 32% lower risk for developing advanced age-related macular degeneration.

By supplementing with saffron extracts and alpha-carotene in addition to other nutrients recognized for their ability to protect retinal structures we can actively protect our eyesight before symptoms of visual loss appear.

Natural Sunglasses for the Eyes

Up to 11 million people in the United States have at least some degree of age-related macular degeneration. While 2% of 50 to 59 years old suffer from the disease, that number surges to 30% in those over 75 years. The macula, the small spot at the center of the retina, is particularly rich in light-sensing cells, which are essential for our ability to sharply see things that are directly in front of us. Because of its yellow color, the macula absorbs excess blue and ultraviolet light in order to prevent their destructive effects on light-sensing cells. Think of it as protective sunglasses for the retina.

Age-related macular degeneration occurs in response to prolonged exposure of the eye to visible and ultraviolet light, as well as chemical stresses from a glucose– and oxygen-rich blood supply. Over time, these factors all contribute to the breakdown of our retinal light-sensing cells.

As degeneration of cells in the macula progresses, victims lose their central vision and become less able to see what they are trying to focus on. Consequently, the ability to read, drive, do intricate work, and perform many other daily tasks can become impaired, even before the onset of legal blindness. It is important to protect the structural integrity of the macula early in order to prevent it from degenerating to its more advanced stages. 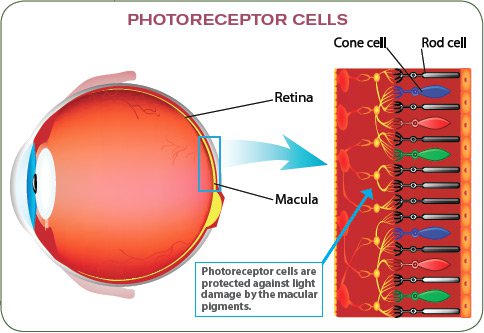 Saffron is a culinary spice derived from parts of the crocus (Crocus sativus) flower. Newly published scientific studies demonstrate its ability to improve visual acuity and to improve sensitivity of the retina to light in people with early macular degeneration.

Saffron protects and prevents the steady breakdown of light-sensitive cells in the center of the retina, the macula. This addresses the root cause of age-related macular degeneration and improves light sensitivity, a major manifestation of the disease. In the first study, patients with early age-related macular degeneration were randomly assigned to receive either 20 mg per day of saffron or a placebo.

The patients also had a better response to dim light during the supplement phase (meaning that their eyes were more sensitive to dim light images). No such changes were apparent during the placebo phase. This means that saffron supplementation improved the light-sensing abilities of retinal cells in early age-related macular degeneration. This is an unprecedented finding.

These findings were replicated after three months, when the supplement/placebo treatments were reassigned and then continued for another three months.4 This suggests consistency and reproducibility of benefit for the dietary supplement with improving visual acuity at a distance.

While these initial observations demonstrated meaningful and rapid visual improvements, scientists wanted to see if saffron could produce more long-term effects. That’s why, in a follow-up study, the same researchers examined saffron supplementation (20 mg per day) in subjects with early macular degeneration over an average treatment period of 14 months.

In a similar finding to the first study, retinal sensitivity to light increased significantly by the end of three months and impressively, it remained elevated for the entire course of the study. Even more impressive, the average visual acuity improved by not one, but two lines on the Snellen chart. This shows us that longer supplementation periods produce further vision improvement.

A third human study confirms the previous findings and demonstrates nearly identical improvements in retinal light sensitivity over an average 11-month period. This study went a step further because it determined that saffron produces improvements in early age-related macular degeneration regardless of one’s heredity. This is important because it means that the results of these studies can be generalized to all adults with early age-related macular degeneration, not just those with specific genetic risk factors. 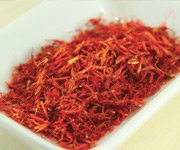 Alpha-carotene is another yellow pigment that offers a complement to saffron. Similar to saffron’s key components, alpha-carotene is a carotenoid that protects the pigmented cells of the retina from light-induced oxidative damage. People who consume the most dietary alpha-carotene have a 32% reduced risk for developing advanced age-related macular degeneration compared to those with the lowest consumption.

This was demonstrated in the Nurses’ Health Study and Health Professionals Follow-Up Study, which analyzed data from 63,443 women and 38,603 men 50 years old or older. These findings make it clear that alpha-carotene may be the perfect complement to saffron’s ability to improve retinal function in early age-related macular degeneration.

THE STAGES OF AGE-RELATED MACULAR DEGENERATION 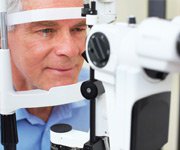 In intermediate macular degeneration, drusen are larger and dark clumps of pigment from broken-down retinal cells may appear on an eye examination. Again, even at this intermediate stage of retinal changes, symptoms are usually absent.

Dry age-related macular degeneration is by far the most common type, affecting 90% of those with the condition. People with this form of the disease continue to have progression and growth of retinal drusen and a gradual breakdown of retinal light-sensing cells, eventually leading to vision loss. 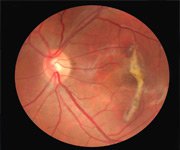 Lutein and zeaxanthin are found in high concentrations in several components of the eye, including the lens, the retina, and the sensitive macula. These carotenoids have been used by most Life Extension supporters for the past several decades.

Studies of adults with age-related macular degeneration show that supplementing with 10 to 12 mg of lutein per day raises the density of protective pigmented cells in the retina by up to 175% compared with patients taking placebo. This means that it enhances the eye’s own ability to protect against damaging blue and ultraviolet light. It is important to note that lower doses, such as 6 mg per day, have proved insufficient to significantly improve pigment density, and have only borderline effects on vision.

In patients with early age-related macular degeneration, 48 weeks of supplementation with lutein at 10 or 20 mg alone (or at 10 mg in combination with zeaxanthin) produced significant increases in electroretinogram signals. This is a measure of the power of light-sensitive cells to produce electrical impulses after stimulation by light. Multiple large clinical studies have now demonstrated that supplementation with lutein and/or zeaxanthin can improve retinal function, increase the ability to see contrasting colors and shapes, and improve visual acuity. 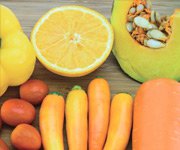 Alpha-carotene is getting a lot of attention as a vision-enhancing, retinal-protecting supplement. Recent studies, however, suggest another intriguing and potentially ground-breaking effect of alpha-carotene in the blood: prolonging life. There is now good support for a mechanism by which it could do so. Large-scale studies have shown a significant association between serum levels of the carotenoid alpha-carotene and the risk of dying. In a study of more than 15,000 people, individuals with the highest alpha-carotene levels were 39% less likely to die from all causes compared to those with the lowest levels.

A 2016 study suggests one possible reason for this longevity-promoting feature of alpha-carotene: preventing the shortening of telomeres, which are the stretches of DNA at the ends of chromosomes that are associated with aging. Shorter telomeres are associated with more advanced aging.

Thus, a high intake of alpha-carotene and other carotenoid pigments could help aging individuals achieve a longer life through slowing telomere shortening. 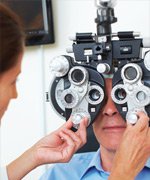 Cyanidin-3-glucoside (C3G) is a flavonoid compound found in many berries that is particularly beneficial for night vision.

That’s because cyanidin-3-glucoside enhances both the quality and function of rhodopsin, a light-sensitive protein found in the rod cells of the retina. Rod cells are the eye’s most sensitive cells and they allow us to see in very dim light. Loss of rod cells is associated with night-blindness or reduced vision in dim light.

Cyanidin-3-glucoside hastens the ability of rhodopsin to regenerate. It is this rapid regeneration of rhodopsin that has vision scientists excited about its potential benefits to enhance night vision. A study of healthy volunteers showed that just 50 mg of a berry extract concentrate containing cyanidin-3-glucoside allowed aging individuals to see better in darkness after 30 minutes.

Astaxanthin is a reddish carotenoid molecule derived from marine algae. It has powerful free radical scavenging and anti-apoptotic properties that help protect retinal cells from death induced by chemical and physical stresses. Astaxanthin has been found to prevent the vision-damaging effects of wet macular degeneration and can also prevent cell damage related to increased pressure in the eye (glaucoma).

Astaxanthin could be especially beneficial for diabetics. Eighty percent of people who have had diabetes for more than 10 years suffer from diabetic retinopathy, a condition that occurs when high blood sugar concentrations cause progressive damage to the retina. Studies in mice have demonstrated that astaxanthin prevents the early cell death in retinal nerve cells that results from high blood sugar concentrations.

Two human studies have shown that the combination of astaxanthin, lutein, and zeaxanthin led to significant improvements in visual acuity in supplemented patients compared with untreated patients.

Macular degeneration threatens every American over 50 with vision loss. Certain carotenoids have been shown to help prevent this condition and delay progression in its intermediate to advanced (blinding) stages. The dilemma up until now was how to protect against so-called “normal” loss of visual acuity that occurs with aging.

New human studies indicate that supplementing with saffron can, for the first time, produce meaningful changes in the retina and improve visual acuity, even in people with early macular degeneration. This knowledge should allow everyone to protect their vision before symptoms appear, and before significant breakdown of retinal light-sensing cells occurs.

Saffron and alpha-carotene are now available in combination with other vision-protecting nutrients, including lutein, zeaxanthin (and their related compounds), and astaxanthin. These plant pigments powerfully absorb blue and ultraviolet light, which are the most damaging to retinal cells. The addition of cyanidin-3-glucosidehelps protect against night blindness and reduced vision in dim light. Widespread use of these plant-derived extracts could have enormous public health implications in providing meaningful ocular support as populations move into older age.