Skip to content
Winter Super Sale 10% Off EVERYTHING!
Products may ship with a black closure. LEARN MORE >>
LIFE EXTENSION MAGAZINE

How to Delay Brain Ageing by 11 Years 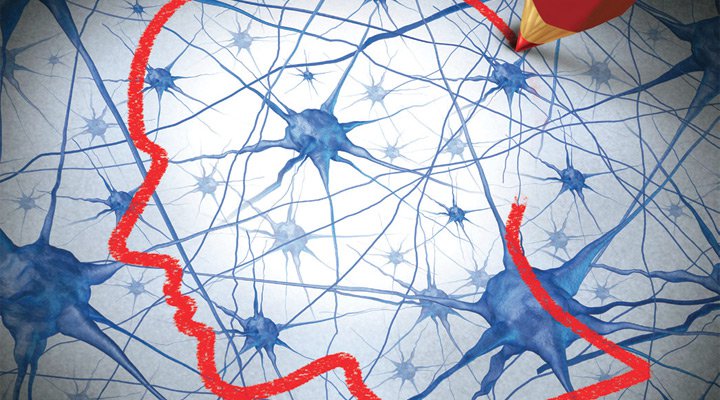 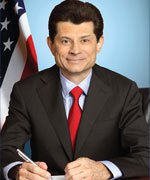 At a lecture I attended two years ago, I was shown age-reversal case histories that I had never before witnessed
The lecture was called “Reversing Alzheimer’s.” The medical case histories were compelling. Many of the underlying mechanisms of reversing dementia were long ago postulated in this magazine.

This lecture was not put on by a neurologist, but by a charity consisting of three educated women who volunteered their time. They presented evidence that unhealthy diets, nutrient/hormone deficits, inflammation, and avoidable toxins were causing people to needlessly develop Alzheimer’s disease.

Right around the time of this lecture, researchers from UCLA and the Buck Institute for Research on Aging announced the results of a study in which nine out of 10 subjects diagnosed with dementia saw meaningful reversals of memory loss. The protocol used included many of the healthy dietary choices long advocated by this magazine (and by the three charitable women who presented at the lecture I had attended).

The unprecedented results from the UCLA/Buck Institute study drew widespread media coverage. No “drug” had ever achieved this level of cognitive improvement.

The UCLA/Buck Institute study author admitted, however, that the program’s downside is its complexity. While supplementing with melatonin, fish oil, coenzyme Q10, methylcobalamin, and vitamin D3 were easy, the dietary/lifestyle changes were so difficult that none of the 10 participants were able to stick to the entire protocol.

That was year 2014. Move forward to 2015 and the results of two larger human trials revealed easier methods to prevent Alzheimer’s and protect cognitive function even into our advanced years.

You are about to learn how even modest dietary changes can slash Alzheimer’s risk by 35% when a healthy diet is consistently followed.

Normal aging is associated with mild cognitive impairment that too often progresses to full-blown Alzheimer’s.

By the time a typical American reaches age 85, their risk of displaying clinical indications of Alzheimer’s rises to a startling 45%.

No one has yet ascertained how this nation’s already strained health care resources will deal with this impending epidemic.

The fantastic news is that decades of human and animal research has led to nutritional approaches that aging individuals can adopt to drastically reduce their senility risk. This means that nursing homes don’t need to fill up with demented individuals who have lost their cognitive and functional independence. 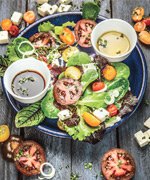 Diet is a powerful environmental factor that affects our thinking abilities in youth and impacts whether we develop dementia as we age.

Study data published in 2015 corroborates the brain-boosting benefits that occur in response to healthier dietary choices.3-5 I suspect most of you reading this have been following at least some of these beneficial eating patterns.

What impressed us about these new clinical studies is that they showed reversals of cognitive dysfunction mostly in the elderly. These individuals would have been expected to already suffer permanent neuro-degeneration that was considered “incurable.”

In one study conducted at Rush University, the average age of the subjects was 81, showing that it may never be too late to alter one’s dietary patterns to protect brain function. 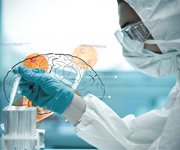 Researchers at Rush University studied over 900 participants, ages 58 to 98 years, and followed them on average for 4.5 years. Three different dietary interventions were evaluated, including the Mediterranean diet, the DASH diet, and a hybrid of the Mediterranean-DASH diets called the MIND diet. The researchers then looked at the effects of these three diets on the risk of Alzheimer’s disease.

The MIND diet emphasised the nutritional components linked to neuro protection and dementia prevention, uniquely specifying the consumption of polyphenols from berries and green leafy vegetables.

Results of their study analysis showed remarkable benefits for each of the diets, in particular for those subjects who closely followed the MIND diet with its emphasis upon polyphenols from berries and green vegetables.

The highest level of compliance with the MIND diet conferred a highly significant 52% reduction in the rate of developing Alzheimer’s disease compared with participants with the lowest level of MIND dietary compliance.

Benefits Found for Other Healthy Diets 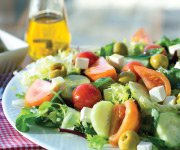 Even study subjects with “middle-of-the-road” compliance with the MIND diet, such as ingesting just some of the constituents of a brain-healthy diet like berries, had their dementia risk reduced by 35%.

These huge risk reductions in response to healthier eating patterns represent game changers as it relates to the dire predictions of tens of millions of Americans suffering agonising dementia-related deaths.

The problem is that relatively few people can stick solely to healthy dietary patterns. The encouraging news is that it may not matter because just ingesting some of the constituents of the MIND diet was shown to confer considerable protection against neuro degenerative disease.

These findings are revolutionary and physicians should wake up to the fact that dementia is not always an irreversible disorder.

It took many decades for the multiple dangers of tobacco smoking to be realised, along with its economic costs to society.

The carnage from making the wrong dietary choices may exceed that of tobacco. Yet there is little talk of banning the advertising of toxic foods and no requirement to warn consumers that ingesting them increases dementia risk.

It is up to individuals to educate themselves about which foods protect against neuro degenerative diseases and the dietary patterns that contribute to brain destruction.

The Magnitude of the Difference

Certain foods like polyphenol-rich berries (blueberries, strawberries) and leafy green vegetables provide benefits for the brain. Foods typically consumed in Western diets, as you will see on the next page, are proving harmful.

The new studies I discuss in this editorial corroborate previous reports showing the devastating impact of poor dietary patterns throughout the body.

What is remarkable, however, is the magnitude of protection conferred when following the proper nutritional program. By adhering to healthy dietary patterns, one researcher was quoted as saying during a 2015 scientific presentation:

“It was about the equivalent of being 11 years younger in age.

This represents an enormous percentage of cognitively proficient time that elderly individuals can enjoy.

Constituents of the MIND Diet

When creating the “MIND” diet, researchers sought to identify the constituents of the well-studied Mediterranean and DASH diets that possessed the greatest neuroprotective properties.

The MIND diet consists of 15 dietary components shown to powerfully impact neurological function for the good or bad.

The ten brain-healthy food groups are:

The five dangerous food groups are:

By reducing one’s intake of the five brain-damaging foods listed above, significant protection against Alzheimer’s and mild cognitive impairment was conferred.

This does not mean one can never consume any of the five bad food groups. Individuals can still follow a MIND diet if they reduce consumption of these brain-damaging foods listed on the next column:

Here are the five brain-damaging foods to reduce or avoid:

On a personal note, I don’t find the above restrictions confining, and I don’t think many readers of this magazine will either.

Components of the MIND Diet 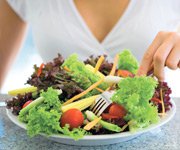 The name of the MIND diet study is:

It investigated the role of diet in the development of Alzheimer’s disease in 923 people ages 58 to 98 years for an average period of 4.5 years.

Similar to the Mediterranean and DASH diets, the MINDdiet emphasises natural plant-based foods and limited intake of animal and high-saturated-fat foods. Some of the unique aspects of the MIND diet are that it specifies the consumption of berries and green leafy vegetables, but does not suggest high fruit consumption.

These findings reveal the robust impact that dietary choices have in maintaining brain health. 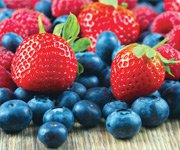 In the introduction of this editorial, I briefly described a study of 10 elderly people that showed memory loss associated with Alzheimer’s disease could be reversed.

This is of particular significance to those already suffering from early- to mid-stage Alzheimer’s dementia.

The approach used in this UCLA/Buck Institute study was personalised to each patient, based on extensive testing to determine what is affecting the brain’s plasticity signalling network. Here is a sample of some of the strategies used on the therapeutic program to reverse memory loss in nine out of 10 of the patients:

The one patient that failed to show improvement was unable to comply with all of the components ofUCLA/Buck Institute protocol. Nine out of 10 people in this study who did comply showed reversals in measurements of memory loss.

The lead researcher of this study admits that the program’s downsides are its complexity and that the burden falls on patients and caregivers to follow it.

It’s interesting to note that three of the dietary supplements used in this study (CoQ10, methylcobalamin, and melatonin) were first introduced to Americans by Life Extension®.28

The more encouraging news comes from the study done at Rush University on a much larger group of elderly people that shows even modest improvements in dietary patterns dramatically reduce Alzheimer’s risk.

Strict adherence to either a MIND or Mediterranean diet produced enormous benefits, such as a 50% or more reduction in Alzheimer’s incidence.6

Since most Americans ingest a wide range of foods, some good and some bad, the researchers were concerned that their findings would have little real-world value to the general population because of compliance difficulties.

Researchers then scrutinized the components of various “healthy” diets to identify which foods provided meaningful protection against age-related cognitive deficits and Alzheimer’s disease.

The researchers did discover that by ingesting just modest amounts of the MIND diet constituents, such asberries, a significant (35%) reduction in Alzheimer’s disease risk was observed.6

The brain health benefits of berries (like strawberries and blueberries) have been demonstrated in other large human observational studies such as the famous Nurses’ Health Study.29

These findings are also corroborated by a number of rodent studies showing better memory performance and brain protection in response to eating berries.11,30-33

We usually think it takes a lifetime of poor dietary choices to impair our neurological function and brain structure. A recent study found significant indicators of brain damage occur just four weeks after eating the wrong kinds of food.

When these same individuals were put on a diet low in simple sugars and saturated fats (a low-glycemic index/low-saturated-fat diet), measures of cognitive function and spinal fluid indicators of brain damage/Alzheimer’s improved.

These findings also help substantiate the remarkable data obtained from the MIND diet study (2015), the UCLA/Buck Institute for Research on Aging study (2014), the 2014 presentation made by the three women from the Sharp Again Naturally (sharpagain.org) charity, and what has long been espoused in this and other heath publications.

The take-home lesson from these studies is to follow a dietary pattern consisting of a high intake of berries, monounsaturated and unsaturated fatty acids, and fish, combined with a low intake of simple sugars and saturated fats (especially those derived from beef and dairy).

Not Everyone Can Afford Blueberries

Buying blueberries in stores can be quite expensive. A prime factor keeping prices high is the shipping of the heavy blueberries and the high rate of spoilage if they are not sold and eaten quickly.

A more cost-effective way of obtaining the active components in blueberries is to take a standardised blueberry extract supplement each day. These are remarkably inexpensive because spoilage and high shipping costs are not an issue.

This magazine has published numerous articles extolling the neuroprotective effects of blueberries and their extracts.38-43 This information has also garnered popular media reports based on scientific studies that found blueberries improve cognitive performance and protect against senile structural changes in the brain.44-46

We urge our customers to include berries as part of their regular diet, and if this is not possible, take advantage of the convenience and low cost of standardised blueberry extract capsules.

After I wrote this article, several more studies were published showing markedly lower dementia risk in those who adhered more to a Mediterranean diet.47-49

The incredible message is that senility of the brain is largely optional. If people follow even modestly healthy dietary patterns, the risk of losing their mind can be greatly reduced.